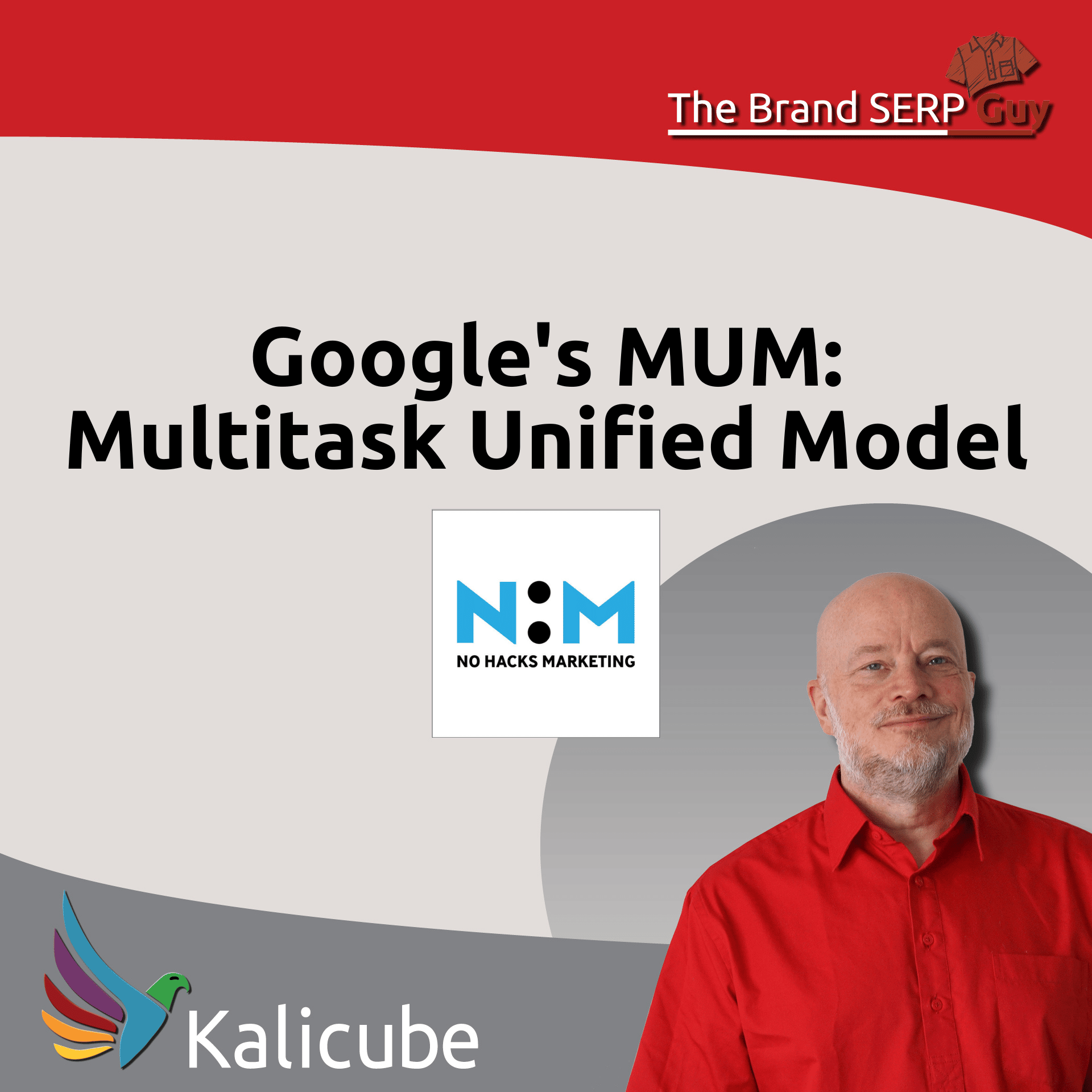 [00:00:00] Slobodan Manic: And this is a good time to mention what’s next with Google, I would guess, because we talked about this before we started recording. Recently, a few weeks ago, they announced, I believe it’s MUM and not M.U.M. or Multitask Unified Model, which is their new AI model built on the same technology as BERT from a few years ago but a thousand times more powerful.

[00:00:25] Slobodan Manic: And the main difference is BERT was designed to understand language and understand our intent and the way we ask questions. MUM can understand and generate language. So, it will be able to understand exactly what you want to ask it and then generate an organic response like there was some person typing. And not only that, but it can understand information across different languages and compile it in the language you want and give you back an answer, which is fascinating but also scary. What is next?

[00:00:58] Slobodan Manic: And I’ll give you an example that they have in Google blog and then let’s talk about that quickly. So the example they have is you want to ask Google exactly this. I’m reading the question. You’ve hiked Mount Adams. Now you want to hike Mount Fuji next fall. And you want to know what to do differently to prepare. And then Google will be able to analyse the entire internet. And it could be things written in Japanese because, of course, it’s in Japan. And it will compare that to English, German, French, whatever language, and give you a response. And it is fascinating. Nothing like this has ever happened in history of humanity. We’ve never had anything like this at this scale.

[00:02:10] The Brand SERP Guy (Jason Barnard): I’m super duper excited. I’m overexcited like a small child. But the one aspect you didn’t mention there was that it can actually analyse across different formats. So it can analyse text alongside images, potentially in the future, video and audio, not potentially, definitely, when they’ve got the technology going, which actually means it’s bringing together those different media formats. And the example you were giving, they were saying, you’ll be able to take a picture of the boots you’re going to use. And they can say, oh, that’s a rubbish idea.

[00:02:40] The Brand SERP Guy (Jason Barnard): Which is phenomenally powerful. And from my perspective, the reason I’m a small child getting overexcited about it is because I’m obsessed by the Knowledge Graph and how you educate Google. And we come back to the child idea, but this time the machine is truly a child trying to learn.

[00:02:56] The Brand SERP Guy (Jason Barnard): If we look back and we look at this machine, you say, right, okay, I’m faced with a child that needs to learn everything. All it needs is for me to explain it clearly and then get corroboration from other trusted sources. So if you look at the child, you’re saying, I need to explain it, then I need to get the teacher to explain it in the same way, then the grandparents, then the baker down the road, then the policewoman, all these people that the child trusts.

[00:03:23] The Brand SERP Guy (Jason Barnard): Now, I like this analogy as well is a child, if I tell the child something, they won’t go into the playground and shout it out, because they are not stupid.

[00:03:33] The Brand SERP Guy (Jason Barnard): But if they’re sure, children going at the playground, they shout this stuff out. And that’s what Google tends to do. It tends to say, well, I’m not sure, I won’t say anything. And then all of a sudden it says lots, and those are Knowledge Panels. It will tend to push them when it’s incredibly confident about the information it’s sharing.

[00:03:48] The Brand SERP Guy (Jason Barnard): And if we come back to MUM, the reason that I’m so excited is because MUM is basically saying Google is going to be able to produce answers and content for people that is generated from the Knowledge Graph from knowledge has accrued from multiple trusted sources, much in the way the child has done it.

[00:04:09] The Brand SERP Guy (Jason Barnard): And so you get this child with a phenomenal memory and a phenomenal understanding of the world who can just regurgitate facts and information that nobody has ever taught it explicitly. And that’s through its understanding everything that’s been pushed into it.

[00:04:27] The Brand SERP Guy (Jason Barnard): And so as a marketer, part of that strategy we’re talking, we’re coming back to understanding, which is right at the beginning. Without understanding, you stand no hope, and without educating the machine, the machine will either not understand you or get it wrong. And you need to make sure that machine understands incredibly accurately and with incredible detail and with incredible confidence. So it shouts out in the playground, which is the equivalent of Google recommending you.

[00:04:57] The Brand SERP Guy (Jason Barnard): It needs to understand who you are, what you do, and who your audience is, because it’s going to start generating content whether you like it or not. 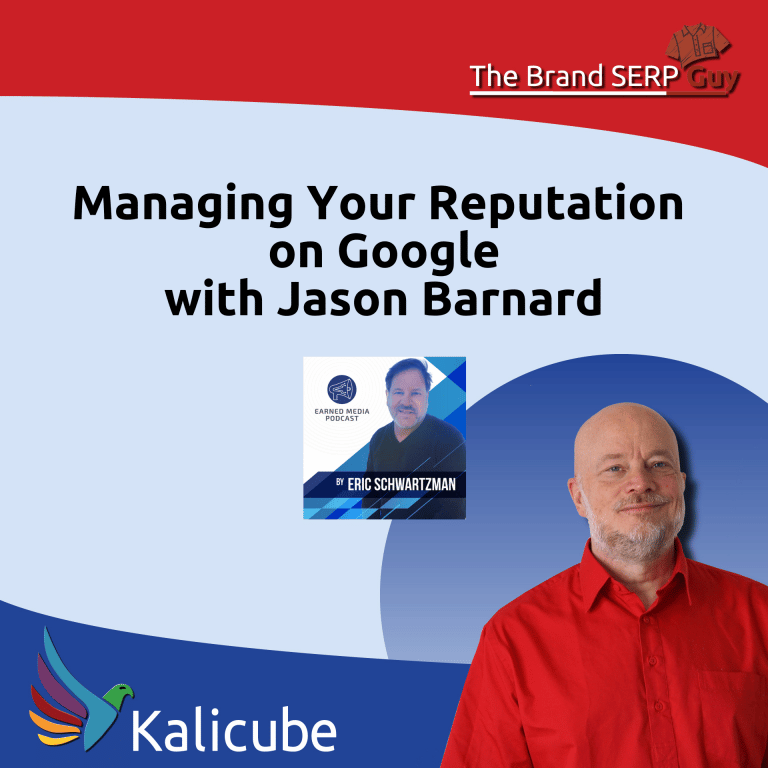 Ever wonder why some brands have better search results than others? Or how Google decides who gets rich results like knowledge panels, snippets, and image results? Brand search engine results… 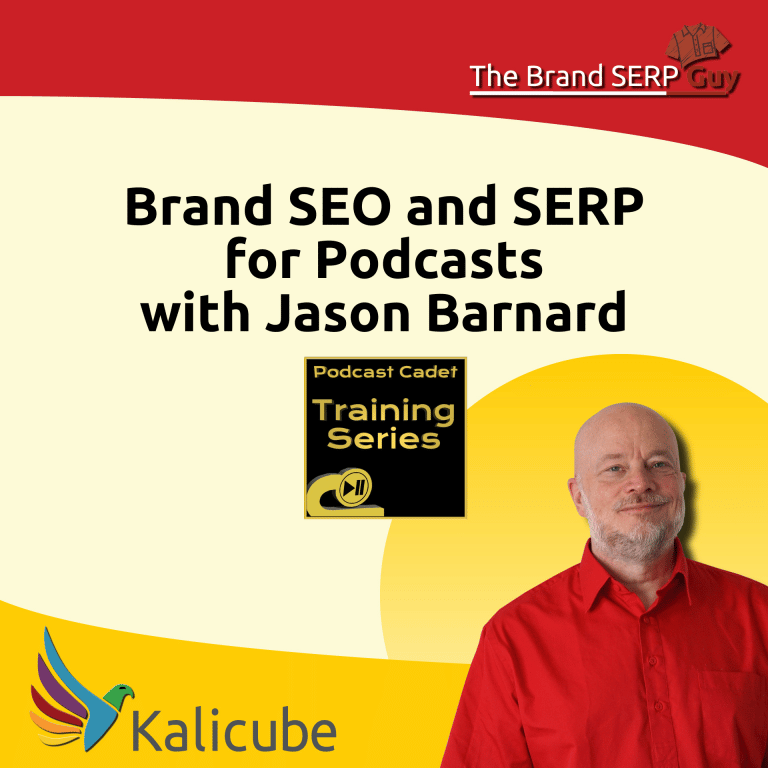 [00:00:00] Christopher Jordan: Helping creators navigate the waters of podcasting. Welcome to the Podcast Cadet Training Series, where we simplify the world of podcasting with techniques and advice from professionals… 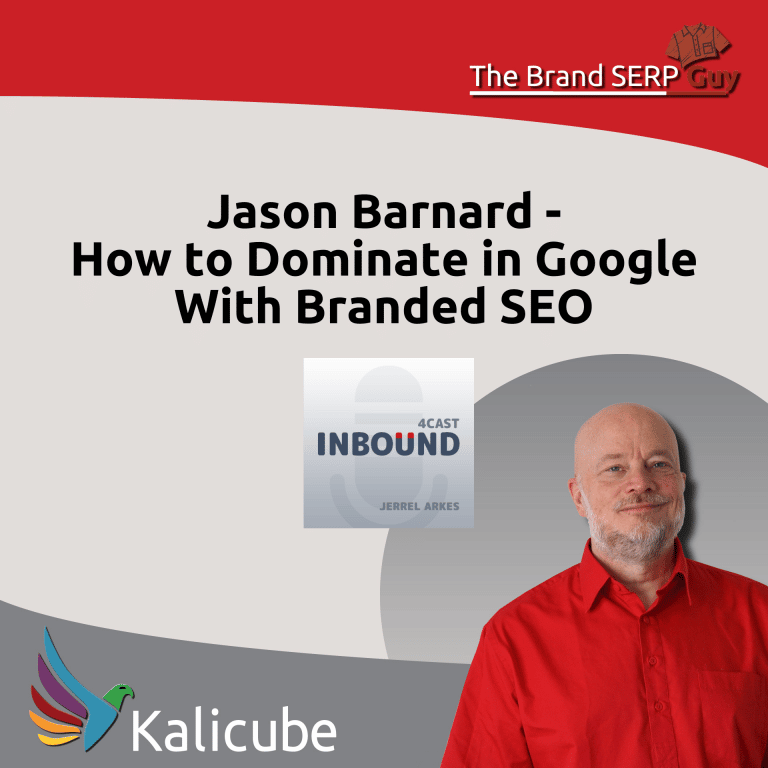 In this episode of the Inbound4Cast Jason Barnard from Kalicube talks about how and why to dominate Google with your branded SEO results. – Why is branded SEO important if… 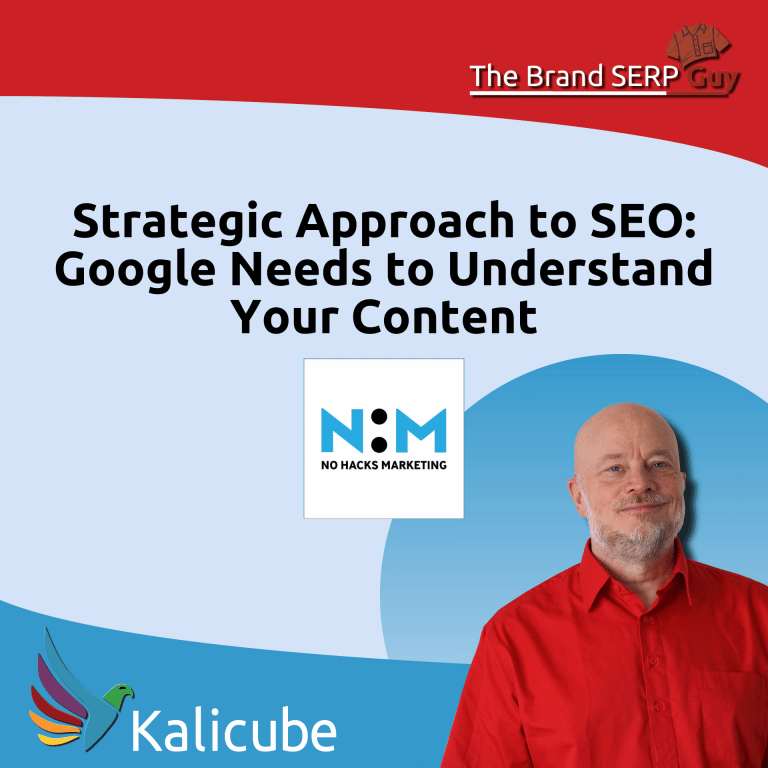 To recommend your content as the solution to its users’ problems, Google needs to understand: – Who you are – What you offer – What audience you can serve In… 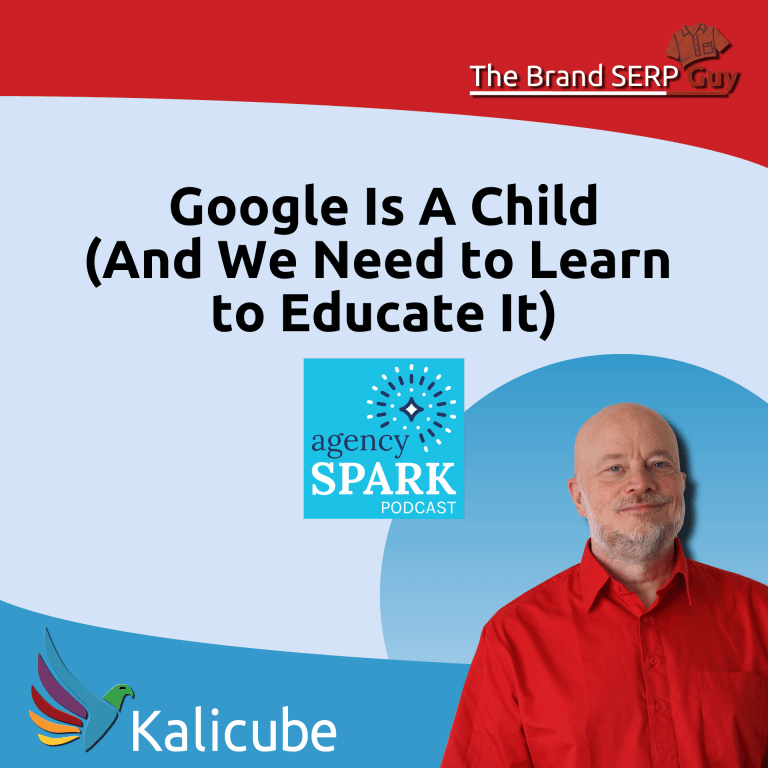 In this episode of the Agency Spark Podcast, Sara talks with Jason Barnard on how Google is a child and we need to learn to educate it. Jason Barnard is… 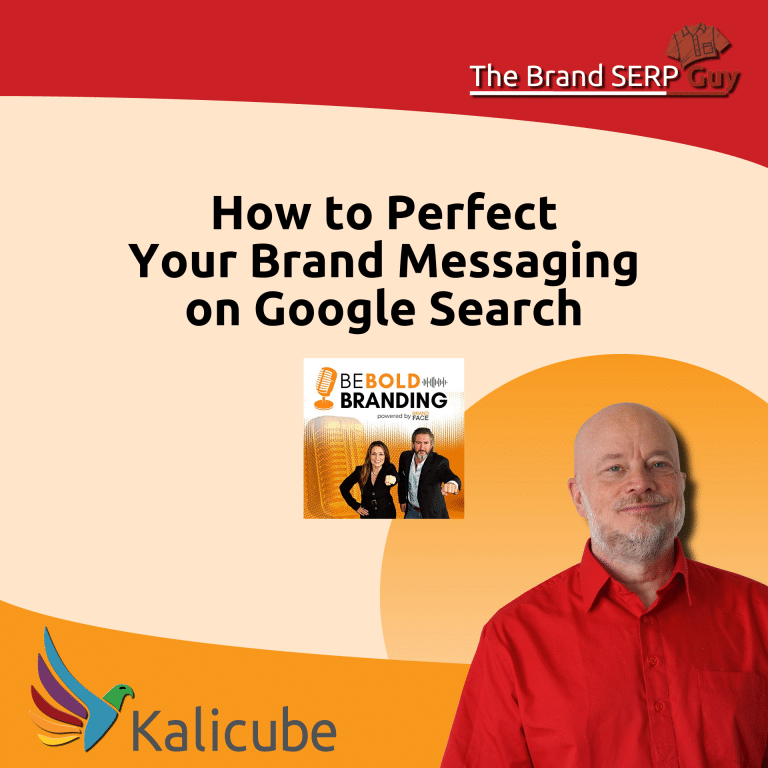 Jason Barnard is an author and digital marketing consultant who specializes in Brand Search Engine Results Pages (Brand SERPs). He helps brand managers upskill in SEO and marketing techniques to…