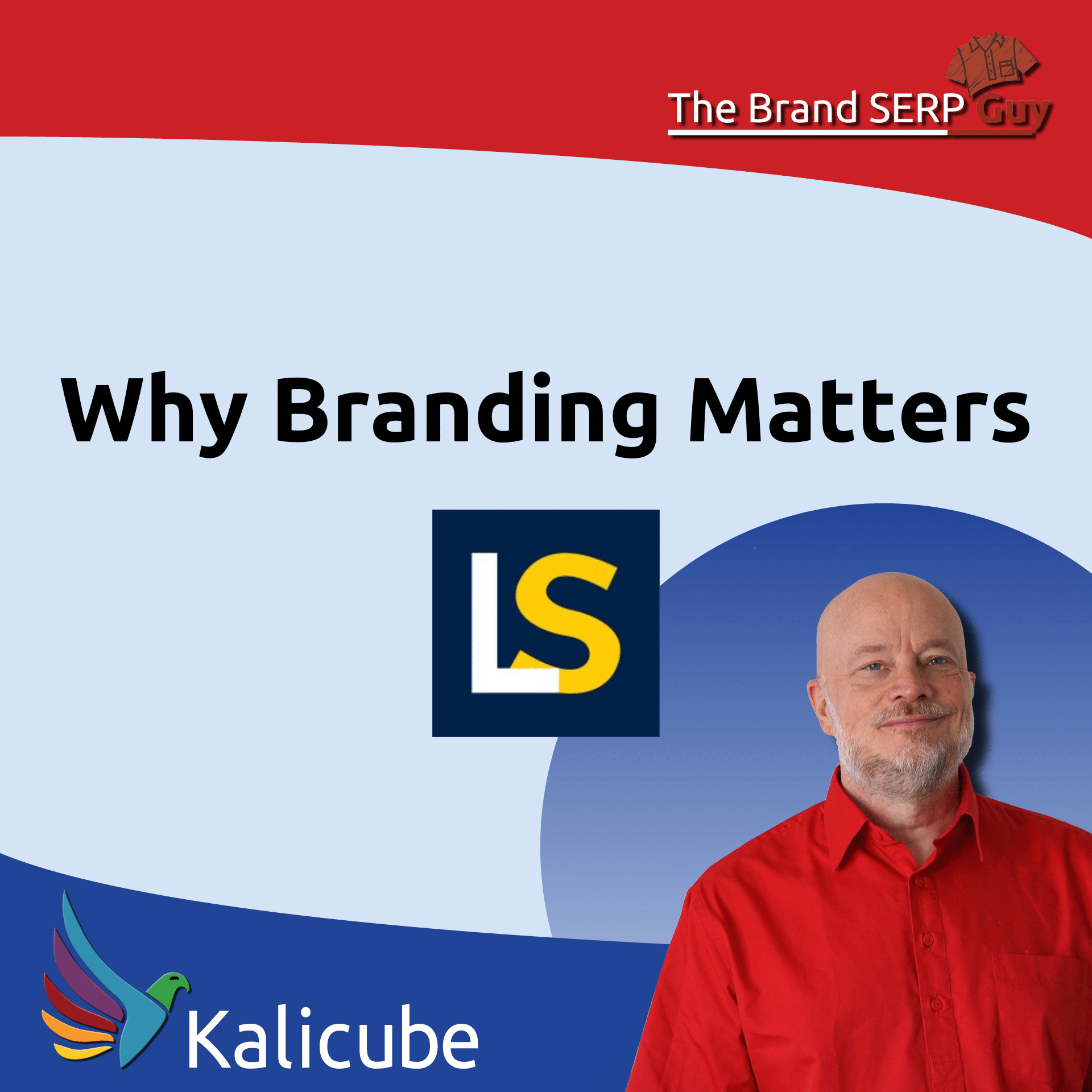 Welcome back to the Leadership Stack Podcast! This is our fourth episode with Mr. Jason Barnard. For this episode, Mr. CEO at 22, Sean Si and our guest will continue talking about digital marketing!

Listen up as they discuss what Google Search Engine does, why should companies make their brand messages on their websites clear with Google, and how much ROI can companies get from digital marketing. Tune in to this fresh episode of the Leadership Stack Podcast!

[00:00:00] The Brand SERP Guy (Jason Barnard): I do things because I believe they’re fundamentally interesting, important, or helpful to people, whether those people know it or not. And I think Brand SERPs is a great kind of follow-on: saying, “Hey, this is really important”. It’s actually really interesting. And you will get an awful lot out of it even though you’ve never thought about it before. My job is to educate everybody. You don’t have to work with me but think about it. Think about how important that is. Think about how important that business card on Google is for you.

[00:01:04] Sean Si: You’re talking about Google like it was a sentient being and I know that it has launched a couple of AIs inside. We have RankBrain. Just last week there’s a broad algorithm update which affected a lot of websites, a lot of our clients as well, mostly in a positive way, I might add, which I’m very happy about. But a lot of people tuning in might not have this affinity with that fact that Google is, to a certain degree, sentient already. And we don’t understand how it works. Can you simplify that for us?

[00:02:06] The Brand SERP Guy (Jason Barnard): Initially in this context, it’s trying to bring the best result as effectively as possible to that user and the result is a solution to a problem. Be it buying red shoes, be it going to a website, be it finding more about something,  Google is bringing the answer to that question or the solution to that problem and it wants to do so effectively and efficiently. And if you bear that in mind, you’re already a big step ahead of probably most of the people in your industry. And secondly, how does it do that? It used to just count words and count links and say, well, this page has got the right number of words and it’s got lots of links coming into the site. It’s popular therefore it must be good. That seems incredibly naive and foolish today. Although 20 years ago it was incredibly cutting edge and brilliant and genius and everyone thought it was amazing. Now you think, oh that’s pretty simplistic. Google now wants the machine to understand the world much in the way a human does.

Using Knowledge Graph and Content Reading is Being Clear With The Machine (Google) About Who You Are, What You Do, and Who Your Audience Is

[00:03:01] The Brand SERP Guy (Jason Barnard): It should be able to read texts, understand the meaning of that text, understand the solution for the problem that page (that content) brings to the user. So it’s doing two things. One of which is building what we call a Knowledge Graph which is basically a machine-readable encyclopedia like Wikipedia, but billions of times bigger thanks to the way they build it because Wikipedia is people typing all this stuff in and obviously they can’t understand the world as a machine if they get people to type it all in. What they now have is the machine goes around the web and it finds information. It extracts these texts. It tries to understand it much in the way a human would try to understand it. And then it puts this information into its Knowledge Graph, in its encyclopedia / its brain / its mind, whatever you want to call it.

[00:03:49] The Brand SERP Guy (Jason Barnard): And then you mentioned RankBrain. RankBrain has aimed at saying this is the intent of the person even if they weren’t clear. If I just type in red shoes, if Google thinks my intent is buying red shoes, it will show me purchasing options. On one side, it’s looking at what is the intent, on the other side it’s looking at what is the answer to that intent. And the Knowledge Graph and the content reading that I was talking about is all about figuring out what the answer is that you are offering. So from your perspective, the single most important thing is for you to describe or explain to Google in your copy – that you clearly explain to it – who you are, what you do, and who your audience is. What is the solution for what audience and why should you trust me?

[00:04:57] The Brand SERP Guy (Jason Barnard): Well, I think it’s really important to say “being clear with a machine doesn’t necessarily mean being boring for people”. I’ve written some really great copywriting that actually is convincing. And you realise that when you’re writing clearly for a machine more often than not, it’s actually clear for the human being too.

[00:05:26] Sean Si: When you write really good stuff for people, Google is able to understand it better as well. And that’s evident with the work that we do. You and I both know it because we’re SEO people. One of the things that I’m wondering about, so when I, whenever I pitched to clients about SEO, it’s going to be all about them and the ROI because to a lot of business owners, that’s the bottom line that’s going to matter. How much money can you give back to me if I invest in your company, in my SEO? What’s the search volume that I’m going to get every month and how much of that am I going to be able to convert to leads or sales, but I could see that in your case, your branding is more of protecting your brand, making sure that your brand is ranking for what it’s supposed to be and you’re represented well by your search engine results page. And I wonder, how did you come to the conclusion that, oh, this is going to sell well compared to selling SEO and selling them ROI which is a lot of business owners like hearing that stuff?

[00:06:27] The Brand SERP Guy (Jason Barnard): Yeah. Well, in fact, I didn’t. I mean, if you look back at my career, which I’ve now walked you through, I didn’t do music because I thought I was going to make boatloads of money. I did it because I enjoy music and I wanted to play music for people and entertain people. I didn’t make cartoons because I thought I would make boatloads of money. I made cartoons because I wanted to educate children. I wanted to create something positive for the world, and I wanted to be a blue dog in a cartoon singing silly songs which is a brilliant job if you can get it. By the way, anybody who’s interested in getting a great job, those are two of the best jobs in the world. I do things because I believe they’re fundamentally interesting, important, or helpful to people, whether those people know it or not. And I think Brand SERPs is a great kind of follow-on, although, but it is saying, hey, this is really important. It’s actually really interesting. And you will get an all full load out of it even though you’ve never thought about it before.

For Jason, It Always Boils Down to Educating Everybody of How Important That “Google business card” is, But Most Importantly it is Doing and Enjoying What He is Really Passionate About

[00:07:17] The Brand SERP Guy (Jason Barnard): My job is to educate everybody. To say, I mean, you don’t have to work with me but think about it. Think about how important that is. Think about how important that business card on Google is for you, for your business, for your bottom of funnel, for your post-funnel clients, in terms of conversions for the prospects, but also keeping those clients on board and not having them to jump ship because you’ve got a bad result pitching up and making sure they’ve got that consistent message all the time when they come to your website. As I mentioned earlier on, their journey with you starts when they search your brand name every time. Most people or a lot of people will come through to your site through Google and that message, they can see it potentially multiple times a day if they’re using your services multiple times in a day. And that’s the kind of message that sticks. It’s as important as your homepage on your website, I would argue.

[00:08:04] The Brand SERP Guy (Jason Barnard): And from that perspective, I am now saying, well, if I can push forwards the idea that this is phenomenally important, even though I can’t measure the ROI from my perspective, personally, I’m doing something I’m really passionate about and that is worth making less money as it were. So, if I could make a million dollars doing SEO for people, which I probably could, I would rather make 500,000 doing Brand SERPs and enjoy myself.

[00:08:28] Sean Si: And you own this fear because no one else is grinding himself or herself with that. So, that’s brilliant!

[00:08:35] The Brand SERP Guy (Jason Barnard): Which puts me in the same situation as I had in Mauritius is I can’t employ people who have got a skillset that suits the job because the job didn’t exist before and this niche didn’t exist before. So as I was saying, I want Brand SERPs specialists, I won’t find any.

[00:09:00] The Brand SERP Guy (Jason Barnard): And then saying kind of what can we do together? How can we fit you into the team? One guy was doing client support and he realised he didn’t like client support. He didn’t enjoy it. He felt uncomfortable and we’ve moved on to doing social media videos and he’s happy as a lark and doing a great job.

[00:09:26] Sean Si: Oh hey and since you’re here, can you do me a favour? Can you hit on the subscribe button and hit the bell button and select all notifications so that whenever we have a new video, you’re going to be the first one to know until then keep leading.

[00:09:40] Sean Si: When I thought about how much money I can make and save versus that kind of volatility, I’d rather set aside that money I’m making and saving for a more stable investment that would grow steadily over time. And then I’ll just keep on adding to that instead of I add it to a crypto and then it drops. 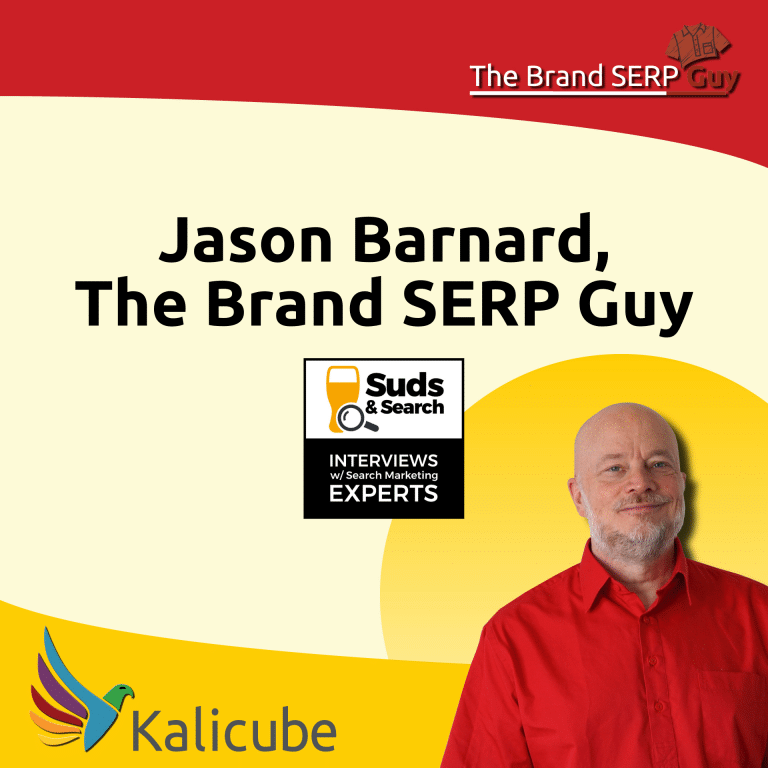 My guest on this week’s episode of Suds & Search is Jason Barnard, also known as the Brand SERP Guy. Jason is the owner of Kalicube, an online SaaS product… 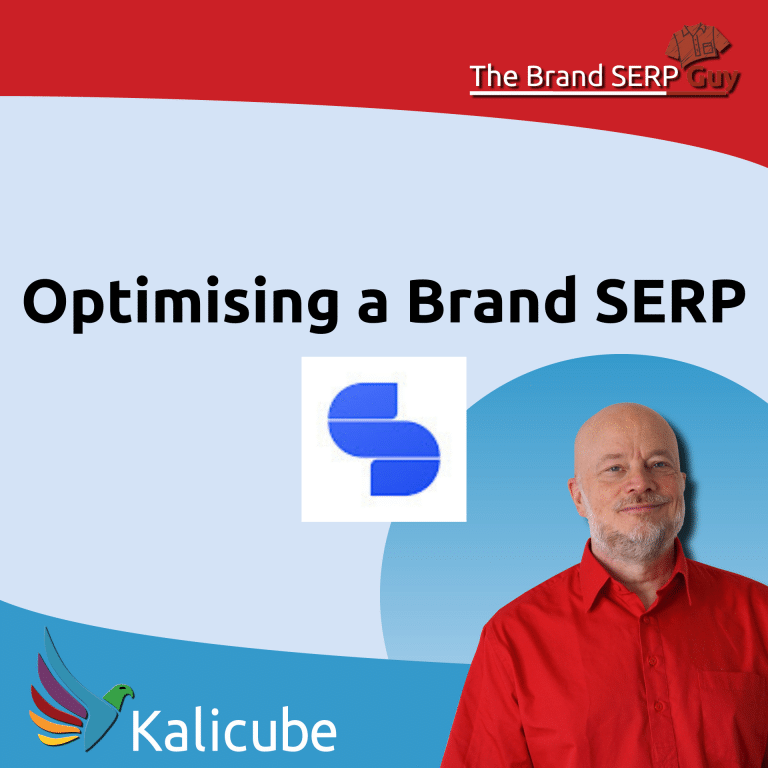 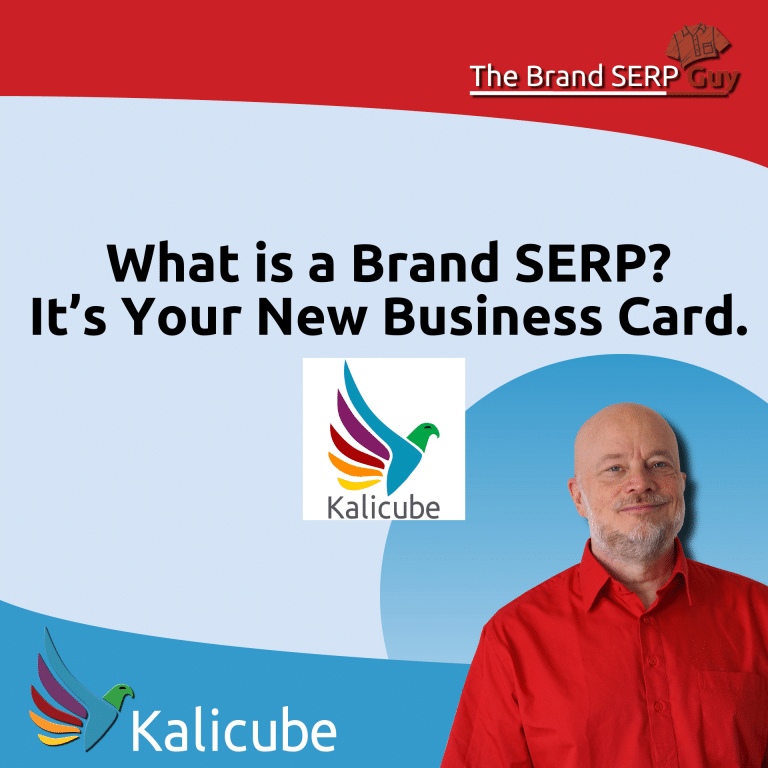 The Search Engine Results Page your audience sees when they google your brand name is called a Brand SERP…. and THAT is your new business card. Brand SERPs and Their… 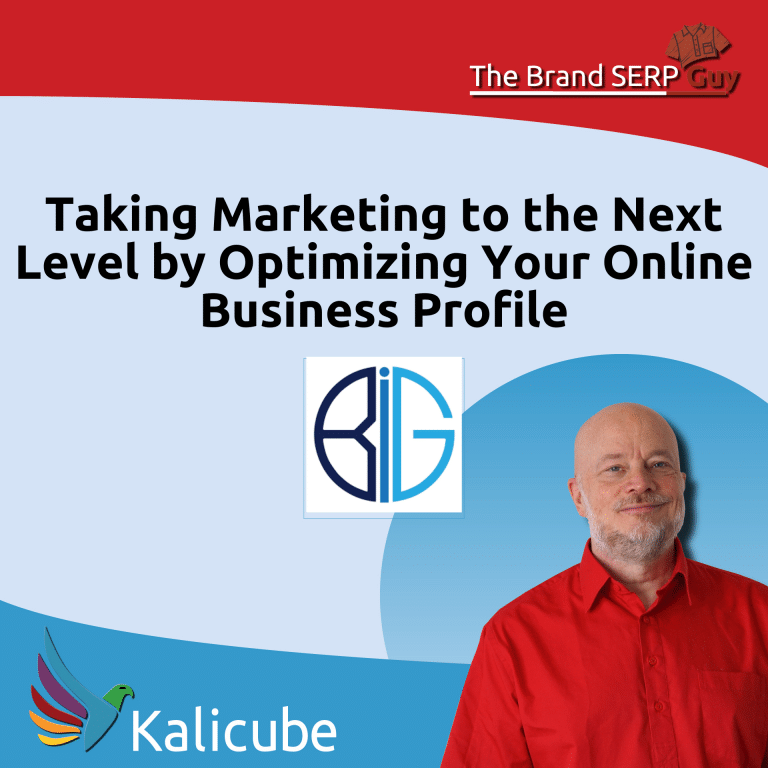 Most businesses have their website pages on social media platforms to increase customer engagement. But does this information appear when you Google your business? In this episode, Jason Barnard, shares…

My first book, The Fundamentals of Brand SERPs for Business, was published in January 2022. I regularly publish articles on leading digital marketing publications such as Search Engine Journal and… 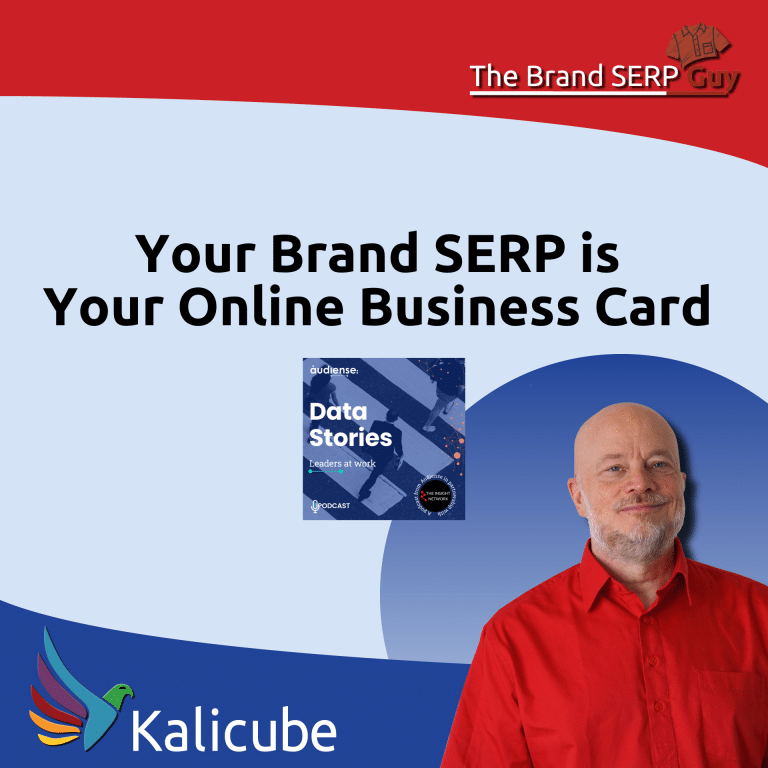 Our guest on this episode of the Data Stories: Leaders at Work podcast is Jason Barnard, Founder/CEO of Kalicube and SEO expert. Through his own experiences, he found out the importance of utilising…